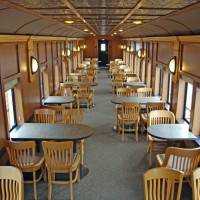 Built between 1917 and 1922 and originally equipped with shelving, the Club Car #300 was used as a “coffin car” to transport deceased World War I soldiers back to their home towns. (We promise, though, that it’s NOT haunted!)

It was obtained by the City of Jasper in 2006 and was renovated by local businesses and individuals in a dining car seating configuration in 2007. The lounge car has a seating capacity of 48 passengers (48 in dining configuration).