Known as the Schaeffer Barn in honor of the Prussian immigrants who began its construction some 170 years ago, this historic hand-hewn log structure now sits at the corner of East Fourth and McCrillus Streets near the Riverwalk in a revitalized area of downtown Jasper.

The barn was disassembled in 2005 and reassembled in its present location in 2006 by a group of volunteers. 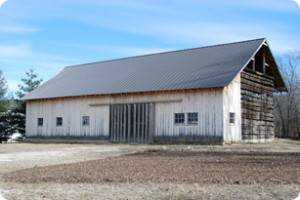 This type of barn is a Cantilever Overhang, which was typical of many German buildings. Local custom at the time was the use of the stone foundation which was paramount in the preservation of the barn. The primary material used in the barn was chestnut logs, and its construction technique of half-dovetail notches is unique. The longest continuous beam is 50 feet. The barn includes three log cribs with two, 26-feet long, feeding troughs hand-hewn from a single white oak tree.

Scheduling Your Event at Schaeffer Barn

The Schaeffer Barn provides a unique, memorable setting or backdrop for your private or public event. The dirt floor adds to it’s rustic charm.

You can hold your Private Event at the historic Schaeffer Barn for $50 + tax per day.

To hold a Public Event, permission must be obtained from the Jasper Board of Public Works and Safety. Contact Janessa Wolf at 812.482.5959 for more information.